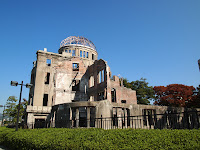 Hiroshima Peace Memorial Park is now a tranquil setting but it once was a bustling city center prior to August 6, 1945. A narrated walk around the park with a HOT guide will give you insight into the modern history of Hiroshima. During the walk, you will hear stories about monuments, memorials and people concerned in addition to the historical facts. The Peace Memorial Museum will be visited before or after the walk. The whole three hours can be spent for the park and the museum. Or you may include A Walk to downtown shopping district of Hiroshima during the three-hour walk. Other options are being conceived, such as a bus or taxi ride to Naka Incineration Plant or experience a Tea ceremony in the vicinity. They will be posted when fully prepared. Please inquire of longer tours which take you beyond the park/museum area to Hiroshima Castle and/or Shukkeien Japanese Garden. Also, the walking tour to the castle and garden are offered independently. All HOT tour guides work for Hiroshima Walks excursions.

The A-bomb Dome stands in the northeast corner of Peace Park. The park is dotted with dozens of memorials and monuments. Each has a story to tell about the people who once lived here. In the center of the park lies the Cenotaph for the A-bomb Victims designed by TANGE Kenzo, the architectural designer of the park and museum. How he got involved in Hiroshima and how his design evolved is a fascinating story. Hiroshima Peace Center was his first major commission and is considered a masterpiece. Along with the Memorial Cathedral for World Peace, about one kilometer away from the park, this museum was designated as an Important Cultural Property by the government in 2006. It was the first time that buildings completed after WWII were chosen. The park is located on a delta in the middle of two tributaries. This is symbolic because Hiroshima is dubbed the city of waters as it developed in a large delta area at the mouth of seven rivers. The river courses were partly diverted for better flood control and now Hiroshima has six clear rivers running from the mountains to the Seto Inland Sea.

This stands a minute away from the park and is visited before going into downtown. It stands in front of a clinic once called Shima Hospital (now Shima Clinic). The bomb is believed to have detonated some 600 meters above this plaque though opinions still vary.

So powerful, so beautiful, so moving. The admission is not inexpensive but the memory of Hiroshima stays with you for a very long time. Orizuru means paper crane, a symbol of peace in Hiroshima and Nagasaki.

Now your admission is discounted in half and costs 1100 yen an adult. It is effective until the end of 2017. The admission fee comes with special origami paper for you to hold paper cranes. You can gently release your paper cranes into the glass well which is part of the building’s side wall. You can get to see the piled-up paper cranes from outside, too.

This can be part of the tour or you can go there after the tour if time allows. If you go on your own, you are asked to show your passport at the ticket counter. In case you would like to include this in the tour, please let us know during the correspondence with us because the tour itinerary has to be negotiated to make it in three hours though the tour can be longer with some additional charge.  The guide’s admission is free of charge.

For more about ORIZURU TOWER, please see the following site.

Hundreds of years ago an ancient highway connected Kyoto to Kyushu. The portion passing through Hiroshima was called the West High Road during the Edo period, Japan’s pre-modern period. Amazingly, this road remains to this day and part of it forms a busy shopping arcade leading from Peace Park. The Hiroshima Andersen building survived the atomic blast as a bank building, later it was refurbished and remodeled into an outstanding bakery and restaurant. They are one of the successful businesses in Hiroshima. There are many other stores and restaurants on Hon Dori shopping arcade carrying traditional and modern Japanese items of interest.

Located at the seafront, this mega plant ingeniously links the city and the ocean with its raised glassy walkway penetrating the building. Architect TANIGUCHI Yoshio, who successfully carried out MoMA’s extension, built this handsome, immaculate waste treatment complex. It’s a great place for family fun and a romantic date!!!

The construction of the garden started in 1620, soon after the Asano clan was dispatched to Hiroshima by the Tokugawa Shogunate. This is a typical Daimyo garden enjoyed by the samurai lords. An oasis of the city, the garden is a window to Japanese aesthetics.

The present castle is a reconstruction of the original built toward the end of the 16th century. The castle went through transformation during the modern times. It first provided a seat for the local government. Later it was used by the army, demolished by the a-bombing, and reconstructed in 1958. The castle premises offer you historical glimpses to both feudal and modern Hiroshima.

* If you have more than 10 people, please contact us.

* Please pay the tour fee in cash on the tour day. Please prepare the exact amount.

In case you would like us to meet you at a specific location at the start of the tour, such as your hotel or train stations, or send you to such places at the end of the tour, Hiroshima Walks offers Escort Service with the additional fee of 2000 JPY a party, respectively. These places have to be within city limits and in case they are located in a far distance, the rate for the escort service has to be 3000 JPY or higher.

The standard meeting time is 9:00 am or later but can be discussed after your contact. The meeting place will be at the A-bomb Dome area or in the lobby of the Peace Memorial Museum. This can be also discussed and finalized in time for the tour.

The tour is over in three hours. The finishing place will be Peace Park or Hiroshima Downtown.

Make a reservation two days before the tour.

Cancellation fee is not charged. Please make sure to notify the guide if you would like to cancel the tour.