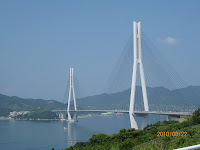 We go cycling from Setoda port (Ikuchijima Island) to Tatara Shimanami Koen (Omishima island) crossing beautiful Tatara Bridge (1,480 meters, 4800 feet) enjoying an airy view of the Inland Sea from the once longest of the world cable-stayed bridge. After lunch, we take bus to visit Oyamazumi Shinto Shrine dedicated to the god of sea, mountain and war, where we will see a 2600 year-old camphor tree. We go back by bike to Setoda around 3:30 PM where our tour ends.

Bus (Round trip from Tatara Park to Oyamazumi Shrine): ¥600

* Please consult us concerning your desired meeting time and point.

3:30 pm at Setoda on Ikuchijima Island

To get to and leave Mihara:

* Lunch is not included in the tour fee.

* We eat at a local restaurant.

* Tour will be canceled if reservation counts less than two.

* Tour will be canceled in case of bad weather and you’ll be informed the previous night.

* For details please feel free to ask anything about the tour to Ms. Fujisaka.

back to main page